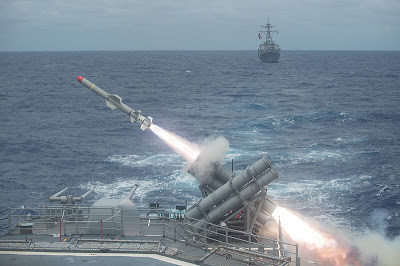 WASHINGTON – The State Department has made a determination approving a possible Foreign Military Sale to the Government of Thailand for RGM-84L Harpoon Block II Surface Launched Missiles.  The estimated cost is $24.9 million.  The Defense Security Cooperation Agency delivered the required certification notifying Congress of this possible sale on August 9, 2017.

This proposed sale will contribute to the foreign policy and national security of the United States by helping to strengthen the U.S.-Thai strategic relationship and to improve the security of an important partner.

The proposed sale will provide enhanced capabilities in effective defense of critical sea lines. Thailand intends to use the missiles on its DW3000 Class Frigate. The proposed sale of the Harpoon Block II missiles and support will increase the Royal Thai Navy’s maritime partnership potential. Thailand has purchased Harpoon missiles previously and will have no difficulty absorbing these missiles into its armed forces.

The proposed sale will not alter the basic military balance in the region.

The principal contractor will be the Boeing Company, St. Louis, MO. There are no known offset agreements proposed in connection with this potential sale.