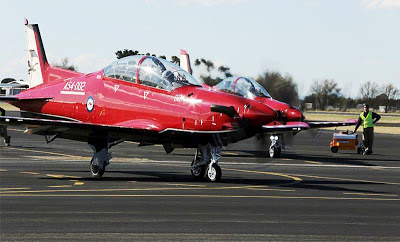 First fleet of PC-21 handed over to Defence

From early 2019, the new fleet of cutting edge PC-21 aircraft will replace the PC-9/A training system, which has been in service since 1987.

“The new pilot training system is a significant leap forward and will train more of our people faster, and to a higher standard than our current system,” Minister Payne said.

“Our future generations of Joint Strike Fighter, Wedgetail and Growler pilots will begin their training on these aircraft ensuring we have a pipeline of highly skilled trainees.

“This will provide the Australian Defence Force with a tailored pilot training system to meet the needs of our pilots for the next 30 years,” she said.

“Over $300 million is being invested in new state of the art training facilities, which incorporates seven new PC-21 flight simulators, both here at RAAF Base East Sale and at RAAF Base Pearce in Perth,” Minister Payne said. Minister Payne also congratulated Laing O’Rourke Australia and Defence’s Estate and Infrastructure Group for its delivery of facilities for this project stage in highly challenged timelines.

“The Government’s investment in the new pilot training system and relocation of Basic Flying Training School to RAAF Base East Sale is part of our commitment to continue producing highly skilled and talented personnel across Air Force, Navy and Army.

“Overall, this is a $1.5 billion investment that will ensure young pilots looking to serve in the Australian Defence Force have access to the latest facilities and training methods.

“The ADF will now have an intake of up to 165 trainee pilots each year at RAAF Base East Sale, leading to an increase in the number of successful graduates,” she said.

Federal Member for Gippsland, the Hon Darren Chester MP, said he was proud of the role his electorate played in training Australia’s pilots, as well as the economic benefits it generated for the local community.

“The flow of investment and job opportunities anticipated for the Sale region with the relocation of Basic Flying Training School, including $200 million for facilities works, will provide a significant economic boost for our community,” Mr Chester said.

“The services contract awarded to Lockheed Martin Australia for the new Pilot Training System will include engineering, maintenance and operating support for the mission systems, and ground-based training,” he said.

The new facilities in Sale will be constructed by September 2018. The Royal Australian Air Force is planning to commence PC-21 based training of undergraduate students in piloting and flying instructor courses in early 2019.