The MRSS will be based on a 150 m design by PT PAL that will be modified, according to the Royal Malaysian Navy’s requirements. (photo : Jane’s)

The MOU was signed on 2 November at the Indo Defence 2016 exhibition in Jakarta, and paves the way for PT PAL to work on its first-ever project for a Royal Malaysian Navy (RMN) vessel, if the contract is awarded to BNS.

Managing Director of BNS, Ahmad Ramli Moh Nor, who signed the MOU on behalf of the Malaysian company, described the agreement as a historic moment between the two countries, which were not known to have collaborated on any major naval platforms prior to the possible MRSS project. 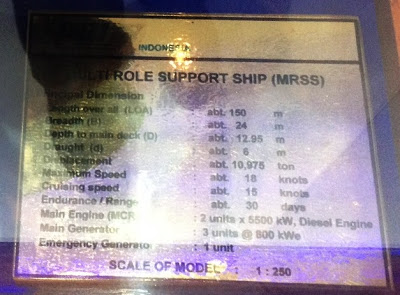 According to specifications provided by PT PAL, its basic design for the landing platform dock (LPD)-like MRSS features an overall length of about 150 m, an overall beam of about 24 m, and a draught of 6 m. The platform has been designed with a top speed of about 18 kt, a cruising speed of about 15 kt, and an endurance of about 30 days.

The ship can be armed with a 76 mm naval gun, and a number of 12.7 mm machine gun positions.

However, an official from PT who spoke to IHS Jane’s on 2 November at Indo Defence stressed that talks with the RMN and BNS are still ongoing, and a final configuration based on the service’s requirements will only be available at a later date.

One of the RMN’s requirements is that the ship must be able to accommodate two helicopters on the flight deck, in addition to two helicopters in the hangar, said PT PAL, who added that this may mean extending the platform’s length to about 163 m.