Sokol Helicopter of PAF were Grounded 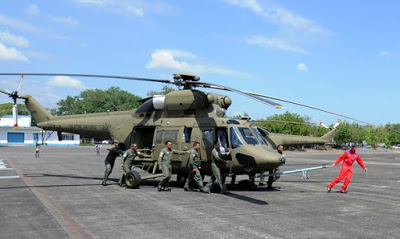 This is the second “Sokol” to crash with the first one being crippled in Lanao Del Sur last 2014. The Air Force has acquired eight units of the W-3A “Sokol” helicopter in 2012 as part of its modernization program. (photo : baomoi)

Four passengers were injured after an Air Force chopper, carrying 12 persons including Philippine National Police officials, crashed in a ricefield in Puerto Princesa, Palawan, on Tuesday afternoon due to a mechanical problem.

In a phone interview with reporters, Mayor said they conducted an inspection for the expected visit of Chief Justice Ma. Lourdes Sereno in the area for the scheduled ASEAN Chief of Justices Conference to be held on November 10.

He said those who were not injured are now back at their hotel.

“It experienced a mechanical problem and crash landed at vicinity of Sitio Sabang, Bgy Cabayugan, Puerto Princesa City. The passengers are reportedly safe with minor injuries,” she said.

The crash happened around 2:42 to 2:45 p.m. Tindog said WesCom already sent an air ambulance and another aircraft to the incident area.

She said they cannot determine yet the extent of the damage of the chopper.

Solano said they landed on a rice field since it was the nearest and safest area, as it was far from a populated area.

However, the ricefield’s uneven surface led the aircraft to tilt to the right as it touched down, damaging its main rotor blades.??

“Such incident will immediately undergo investigation per standard operating procedure. The PAF will have no further comments until such investigation is concluded,” the PAF statement read.

The six other Sokol helicopter of PAF were grounded while investigation is ongoing.