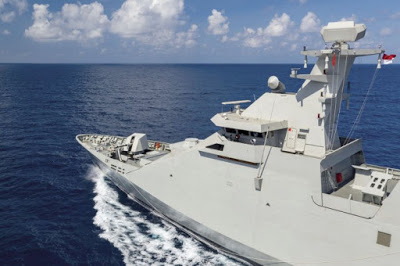 Damen has been contracted by Indonesia to procure a range of ‘fitted for but not with’ systems. Specific equipments include MBDA’s VL Mica point defence missile system and its MM 40 Block 3 Exocet anti-ship missile system, and the Rheinmetall Millennium 35 mm cannon (photo : Thales)

Damen Schelde Naval Shipbuilding (DSNS) is in negotiations with several suppliers for the procurement of a package of weapons and equipments for backfitting to two SIGMA 10514 Perusak Kawal Rudal (PKR) frigates being delivered to the Indonesian Navy (Tentara Nasional Indonesia – Angkatan Laut, or TNI-AL).

The Indonesian Ministry of Defence (MoD) and DSNS as prime contractor, signed a contract in December 2012 for the first PKR. An option for the second vessel was exercised in mid-2013. Modular construction of the ships has been shared between the Vlissingen, Netherlands, facility of DSNS and the PT PAL shipyard in Surabaya, with final assembly, integration, and testing performed in Indonesia.

Lead ship KRI Raden Eddy Martadinata completed sea acceptance trials in September 2016 and is planned for delivery at the end of January 2017, following completion of crew training. Work continues at Surabaya on the completion of the second vessel, to be named Gusti Ngurah Rai. Delivery is scheduled for October 2017.

While the PKR vessels are being delivered with a core mission system supplied by Thales Nederland – including the TACTICOS combat management system, SMART-S Mk 2 surveillance radar, STIR 1.2 EO Mk 2 radar/electro-optical tracking system, and Kingklip hull-mounted sonar – the only weapon system included in the original contract was a single Leonardo (Oto Melara) 76/62 Super Rapid gun. However, space, weight, and service provisions were included in the SIGMA 10514 design to enable the retrofit of additional ‘fitted for but not with’ (FFBNW) weapon systems, including a point-defence missile system, a surface-to-surface missile system, and a close-in weapon system.