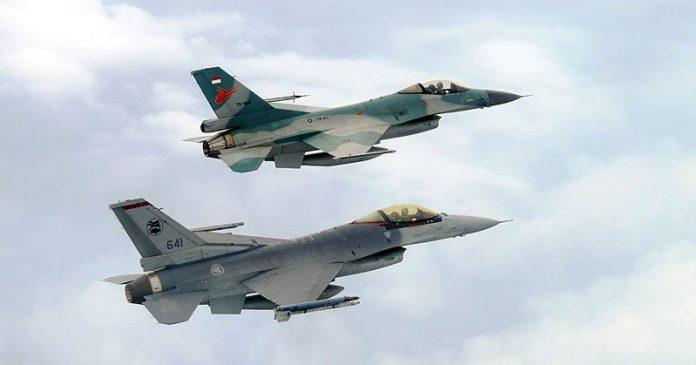 Chief of Air Force Major-General (MG) Mervyn Tan and Chief of Staff of the Indonesian Air Force (TNI-AU) Air Chief Marshall (ACM) Agus Supriatna co-officiated the closing ceremony of the 19th edition of Exercise Elang Indopura this afternoon at Roesmin Nurjadin Air Force Base, Pekanbaru, Indonesia. The Republic of Singapore Air Force (RSAF) participated in the biennial exercise with the TNI-AU from 16 November to 2 December 2016.

The exercise comprised two phases: a Command Post Exercise held at Paya Lebar Air Base, Singapore, from 16 to 18 November 2016; and an air manoeuvring exercise held at Roesmin Nurjadin Air Force Base from 21 November to 2 December 2016. More than 150 personnel from both air forces, with a total of 10 aircraft including the RSAF’s F-16C/D and TNI-AU’s F-16A/B were involved.

Commenting on the significance of the exercise, Commander Fighter Group and RSAF Exercise Director for Exercise Elang Indopura 2016 Colonel (COL) Linus Tan said, “This exercise provides a valuable platform to strengthen the bilateral relationship between the RSAF and TNI-AU. In addition, the opportunity to train with our counterparts has allowed our airmen to enhance their professional competencies and promote mutual understanding between the two air forces.”

Exercise Elang Indopura serves as an excellent platform to enhance the professionalism of the RSAF and TNI-AU, and to foster mutual understanding and interoperability between the two air forces. This bilateral exercise also underscores the close and long-standing defence relationship between Singapore and Indonesia.