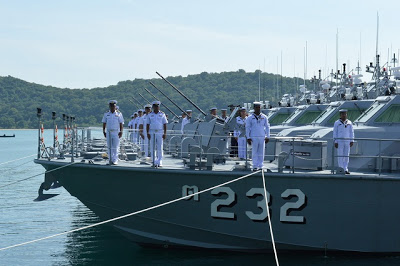 The Royal Thai Navy yesterday took delivery of six new patrol boats to guard the country’s coastlines in the Gulf of Thailand and in the Andaman Sea and to provide security for the royal family.
All the six patrol boats built by Marsun ship builder were received by Navy commander Admiral Na Areenich at the ceremony held at the Sattahip Naval Base’s Laem Thien Pier.

The boats were then  handed over to commander of the Royal Thai Fleet Admiral Sucheep Wangmaitree and later to the Coast Guard Squadron commander Rear Admiral Banchob Phodaeng. The six patrol boats will replace the four patrol boats which it received from the United States in 1968-1976. They are scheduled to be decommissioned soon.

The new boats will be operating in the Gulf of Thailand and Andaman Sea, guarding against drug traders, smugglers and illegal fishing fleets. They are also tasked with providing security for the royal family.