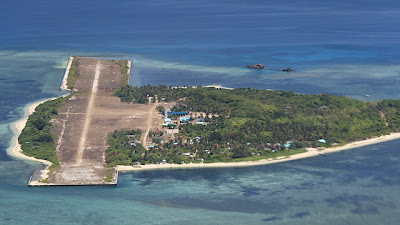 PAG-ASA ISLAND. The second biggest island in the disputed South China Sea is home to about a hundred Filipinos. (photo : PAF)

MANILA, Philippines – The Duterte administration continues to defer the repair of the Philippines’ only runway in the disputed West Philippine Sea (South China Sea) even as China has reportedly built runways on at least 3 reefs it illegally reclaimed. (READ: PH runway in Spratlys erodes as China reclaims to build own)

“Because of warming relations with China, we are not going to make any aggressive actions in the West Philippine Sea,” said Armed Forces of the Philippines (AFP) chief General Eduardo Año on Thursday, January 12.

Defense Secretary Delfin Lorenzana said they will keep the “status quo” and will continue to set aside the money – up to P800 million ($16 million) – already allocated by the previous administration to repair the runway.

The Rancudo Airfield was built in the ’70s on Pag-asa Island, one of the biggest in the disputed territory where a community of about a hundred Filipinos reside. The military continues to use the runway, particularly for small transport aircraft like the Fokker and the Nomad of the Philippine Air Force and Islander of the Philippine Navy.

But the short 1.3-kilometer airstrip could be dangerous for bigger aircraft such as the C130 cargo plane that the military traditionally uses to bring supplies around the country.

Lorenzana plans to visit the troops deployed in the West Philippine Sea. But it is not clear yet if he will fly going to the disputed area or he will take one of the navy ships. The last high-profile visit to Pag-asa Island was made by former AFP chief General Gregorio Catapang in 2015.

Duterte has sought warmer ties with China, a turnaround from the foreign policy of former president Benigno Aquino III who took China to court over its claims on maritime features located inside the country’s 200-nautical-mile exclusive economic zone.

Aquino also sought the assistance of the Philippines’ longtime defense treaty ally, the US, which calls for freedom of navigation in the South China Sea.

The Philippines won the case before the United Nations-backed Permanent Court of Arbitration. The ruling effectively dismissed China’s 9-dash-line claim over the South China Sea and declared that Mischief Reef – where one of China’s runways is located – belongs to the Philippines.

The previous administration had hoped to fix the runway on Pag-asa Island after the arbitration court’s ruling.