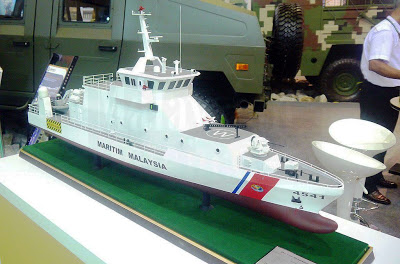 KUCHING: The Malaysian Maritime Enforcement Agency (MMEA) is building six large vessels in an effort to improve its maritime security supervision and monitoring of the country’s waters.

MMEA director-general Datuk Seri Ahmad Puzi Ab Kahar said two of the vessels would be deployed in the waters of Sarawak and Sabah and the remaining in the waters of Peninsular Malaysia to cover areas where the country shared its maritime borders with Indonesia, Vietnam, Thailand and Singapore.

“The safety of the country’s waters is always MMEA’s priority given the fact that the water passage is used as the main route for trading activities (exports and imports) between Malaysia and other countries,” he told the media after launching the Sarawak MMEA Volunteer team here, yesterday.

He said first vessel would be launched in March and would participate in the upcoming Langkawi International Maritime and Aerospace (LIMA 2017) exhibition in Langkawi on March 21-25, while the second vessel was scheduled to be launched in May. “I am optimistic that with the new vessels MMEA will be able to monitor the country waters efficiently,” he said.

The vessels, according to Ahmad Puzi, would be equipped with modern and sophisticated technology ,including the unmanned aerial vehicle (UAV) system that could get more information from the radar way above what the ordinary ships were capable of doing.

In addition to the six large vessels, Ahmad Puzi said the agency would also receive two 90-metre vessels from the Japanese Government next month.

According to Ahmad Puzi, the two vessels was the Japanese government’s gifts for MMEA in keeping the waters safe which was also the gateway for Japanese vessels in their import and export activities.

“In fact, we also received same gifts from other countries such as Canada, which accounts for two speedboats, and Australia also contributed two vessels and five speedboats to MMEA,” he added.