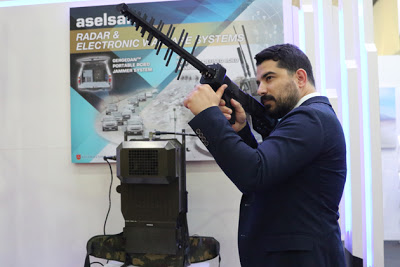 Turkish defence company Aselsan has unveiled a man-portable ‘anti-drone jammer’ system at the Langkawi International Maritime and Aerospace (LIMA) 2017 exhibition, and is positioning the product for the export market for the first time, a company official told Jane’s.

The system, which has been developed to protect high-security facilities, such as military bases and airports from rotary-wing and fixed-wing unmanned aerial vehicles (UAVs), is designed to disrupt remote control, data link, and satellite navigation frequencies, which will effectively render an offending UAV uncontrollable.

According to an Aselsan representative who spoke to Jane’s at the LIMA exhibition, the system has been developed relatively quickly, over a period of six months, in response to the growing threats posed by the proliferation of commercial UAVs. 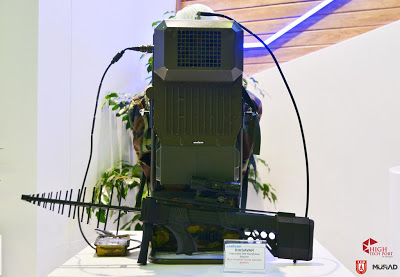 “Aselsan analysed that developing a cost-effective, man-portable, and ergonomic solution that doesn’t need any sensor systems to disrupt hostile drones, would meet the high expectations of its present and future customers,” said Ertugul Nacak, account manager at Aselsan’s radar and electronic warfare systems.

Known as the IHASAVAR, the system consists of one 11.5 kg backpack that houses two lithium-ion batteries, and a handheld 2 kg ‘rifle’, which features a directional antenna that will be aimed at hostile UAVs. According to specifications provided by the company, the system can operate in temperatures that range from -30°C to 50°C and features an operation time of about 1.5 hours.

The IHASAVAR system is currently in use with the Turkish Armed Forces, and the company is currently eyeing the wider Asia-Pacific region as a potential market for the system.