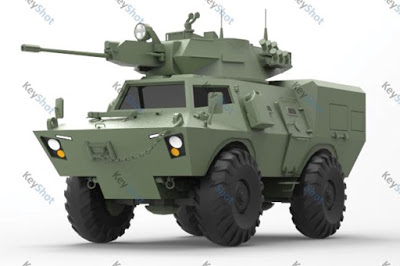 The Royal Thai Navy (RTN) has chosen domestic company Panus Assembly to modernise its V-150 4×4 armoured vehicles. To be re-designated as the HMV-150, they will be equipped with various weapons, feature thicker armour and have a higher performance. (Shephard)

Thai Navy has handed the V-150 armored wheeled vehicle to Panus Assembly, a domestic company. The modernization is called the HMV-150.

The car has thicker armor, and with higher performance. The new structure is designed to be strong and comfortable in the interior space. The HMV-150 weighs 16 tons. The car is 6.5 meters long and 2.5 meters wide. Armor side and roof top 12 mm thick, under the 16 mm thick belly, protects the surrounding fire and protects the explosives well. With the efficiency and capacity equivalent to modern armored wheeled tires. Also, save on new car financing. The important thing is that we can do it locally. Make maintenance and repair work done quickly and conveniently. It also promotes the domestic manufacturing industry and factories.