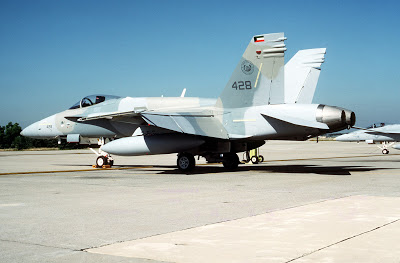 SHAH ALAM: Kuwaiti Hornets? There is a possibility that the excess fighter aircraft offered by Saudi Arabia are actually surplus Kuwaiti F/A-18 C/D Hornets. Former Combat AirForces editor Alan Warnes, who came for LIMA 17, tweeted today that “the RMAF has been offered surplus F/A-18C/D by Kuwait”.

Warnes did not state where he got the information on the Kuwaiti Hornets. This is interesting as in answers to my questions for LIMA 17, specifically on the Kuwaiti Hornets, the reply from RMAF chief Jen Affendi Buang was:
“RMAF already identified shortlisted new aircraft for its MRCA program. Currently, there is no plan in acquiring used aircraft to be used in country.” It was, for this reason, Malaysian Defence did not pursue the issue further during LIMA 17. Only to be sucker punched like this. So what gives? We are not sure but it will be a very interesting a couple of weeks doesn’t it?

And as for the surplus helicopters offered by the Saudis, it is likely to be Blackhawks based on conversations with several industry sources. But it is still early days, it was told.