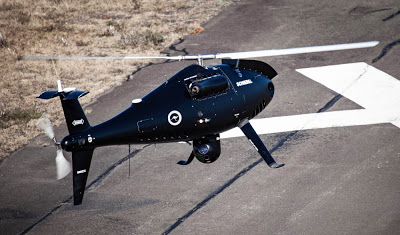 DEFENCE has recovered a multi-million dollar unmanned aerial system (camcopter) which crashed on the Beecroft Weapons Range, east of Nowra on Monday, causing a small bushfire.

The Schiebel S-100 Camcopter experienced a control failure while conducting flying conversion training for navy personnel at the weapons range near Currarong.

In a statement, defence said personnel initiated procedures in an attempt to recover the aircraft but it crash landed in an unpopulated bushland.

The crash caused a bushfire which burnt out two hectares.

The recovery of the aircraft was complicated by the fact it crashed into a site off Impact Road, which, like large sections of the firing range, had possible unexploded ordnance.

Personnel had to wait for army engineers to declare the area safe before being able to locate and remove the downed aircraft.

The Royal Australian Navy awarded the contract to Schiebel for the supply of its Camcopter  S-100 System and three years follow-on Contractor Logistics Support in February this year.

Navy released an international request for tender (RfT) in late February 2016 for a UAS capability.

After thorough proposal evaluation and completing negotiations, the contract was signed at the end of December 2016.

It is understood each aircraft carries a pricetag of around $523,000 (US$400,000), while in 2005 the fuel system price, including two air vehicles, the control station, payload, ground equipment, training, and logistics package was estimated to cost around US$2 million. 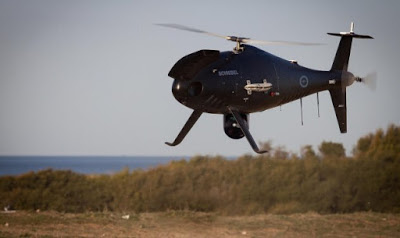 The Camcompter S-100 features a carbon fibre and titanium fuselage, has a maximum takeoff weight of 200 kilograms and can carry a 34-kilogram payload of electro-optics and infrared sensors for up to 10 hours.

It has a maximum speed of around 120 knots (220km/h) and is powered by a 55 horsepower (41 kilowatt) Diamond piston engine, powered with AVGas or heavy fuel.
The aircraft has a ceiling height of 18,000 feet and can conduct vertical takeoff and landings.

The S-100 has a beyond line-of-sight capability out to 200 kilometres, is able to fly completely autonomously and can be operated from a pilot control unit with missions planned and controlled via a simple point-and-click graphical user interface.

It can operate day and night, under adverse weather conditions. High-definition imagery is able to be transmitted in real time.

It has successfully completed missions on more than 30 different naval ships on all of the world’s oceans, in every environment from the tropics to the Arctic.

Schiebel was founded in 1951, the Vienna-based Schiebel Group focuses on the development, testing and production of state-of-the-art mine detection equipment and the revolutionary Camcopter S-100 Unmanned Air System (UAS).