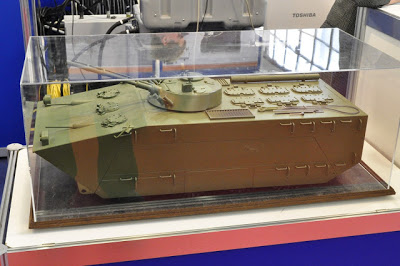 As he reported on his page on the social network ” Facebook ” by Sergey Mosienko, within the framework of the planned adoption of the State Program in the Russian arms on the 2018-2025 years it is planned to develop a family of machines on the basis of the combat marines machines (BMMP) Russian Navy. BMPP intended for delivery by sea to the department of Marine Detachment accomplish the combat mission, destroying armored vehicles and personnel, fire support of troops at all stages of the combat mission.

Chassis BMMP should be standardized and ensures the creation on its base of anti-tank and anti-aircraft missile systems, self-propelled guns and mortars, command post, reconnaissance vehicle (our subject), repair -evakuatsionnyh, engineering and ambulances.

Concept for BMMP (image : Sergey Mosienko)
One of the determining factors of the emergence of a promising combat vehicle Marine Corps is the emergence of a new theater of war: Republic of Crimea and the coast of Krasnodar region,
Marines must have strength and resources that provide not only the delivery, but also support the landing fire.
(BMPD)