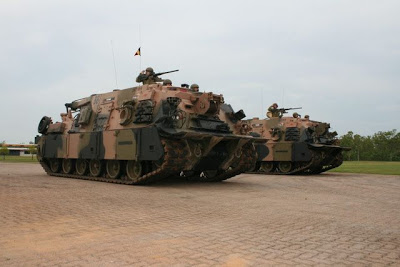 “The HERCULES is a 64 tonne tracked vehicle used primarily for the repair and recovery of tanks and other vehicles whilst under fire and will complement the seven currently in operation,” Minister Pyne said.

“Valued at more than $58 million, the six new HERCULES will support armoured units based in Darwin and Townsville, and operator and maintenance training at Puckapunyal and Bandiana in Victoria.

“Pleasingly the maintenance, servicing and engineering support for this equipment will be delivered regionally by Broadspectrum, with four new jobs to be created in Darwin.”

Since their delivery to Defence, all six vehicles have been accepted into service, painted in Australian camouflage and sent to their units.