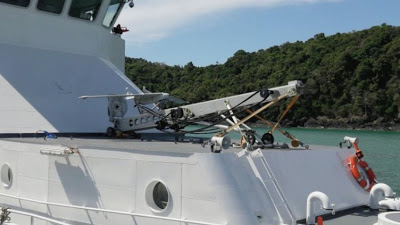 The Fulmar UAV, seen here mounted on KM Bagan Datuk, at the LIMA 2017 exhibition in Langkawi.

The trials, which were conducted from KM Bagan Datuk (4541), took place over a period of about two weeks in early April 2017. Procedures that were conducted in the trials included launching and recovering the UAV under various ship operational conditions and wind speed, and training its crew in procedures to retrieve the UAV from the water should there be a failure in onboard recovery efforts.

The NGPC platform features a 3.5 m by 0.5 m catapult based launcher, situated just behind the position of its primary weapon – the SMASH 30 mm remote controlled stabilised naval gun system from Turkish defence company Aselsan. To retrieve the fixed wing UAV under normal operating conditions, the NGPC utilises a net-based impact-absorbing system deployed on the deck behind the bridge.

The Fulmar UAV features a wingspan of 3 m and a length of 1.2 m. It can operate at altitudes of up to 4,000 m (13,000 ft), and can carry a payload of up to 8 kg. According a Thales España official who spoke to Jane’s at the DSA 2016 exhibition in Kuala Lumpur, the Fulmar UAV in MMEA configuration will each carry one high-resolution video camera that allows for automatic target tracking via operator consoles located either onboard the ship, or in a ground control station.

The MMEA is currently in the process of receiving six new 44 m NGPCs from Malaysian company Desini Shipbuilding.