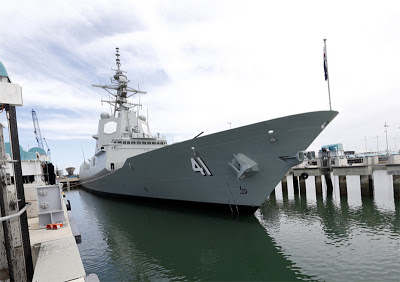 The project to supply new destroyers for the Royal Australian Navy continues in earnest with the delivery of the Hobart Class Command Team Trainer and the Aegis block of the future HMAS Sydney now in position.

The Trainer simulates the operations rooms of a destroyer and is a significant improvement on existing command team trainers already in service.

Consisting of mock-ups of a number ship systems, including the Aegis weapon system operator displays control panels and interfaces, the training environment delivery process involved the completion of formal acceptance tests, running over a four-week period and involving the execution of 24 separate test procedures.

Then followed verification and audit against the original design specifications. Mr Brad Flemming is the Combat System Shore Systems and Services IPT Program Manager and said he was proud of the efforts of his small group of experts.

“Their dedication and hard work has produced a system with the quality and complexity you would expect of a much larger team,” he said.

Concurrently ‘Block 709’ dubbed ‘the heart of the Aegis system’ for Sydney was consolidated on 15 March.

Weighing 202 tonnes, it was lifted onto the top of the hull using a crane, where it was joined to blocks 703 and 705, in a process that took only 30 minutes.

The third Destroyer’s team continues to implement the lessons learnt from the previous ships, which has enabled enhanced outfitting of blocks from day one.


Prior to consolidation the aft diesel generator exhaust stack was capped, full paint system application internally and externally, the combat system was prepared and most importantly, the full-fitting of all four Array foundations and lining. 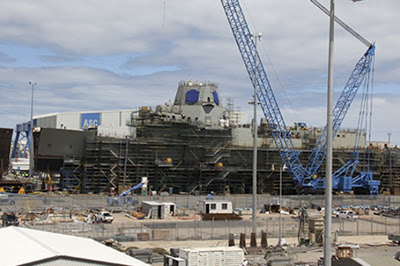 To achieve the fitting of the Array foundations, the team had to work closely with the Accuracy Control Team to achieve foundation flatness of 0.02 millimetres.

NUSHIP Sydney Manager Jason Loveday commented on the importance of the block and its link to the progress of the project.

“The completion of Block 709 signifies a large achievement for the whole team involved,” he said.

“Construction on the Block began over two years ago and through lessons learned from the first two ships, we have achieved a 30 per cent improvement in production hours from Ship 02 to Ship 03.

“Over 100, 000 person hours have been spent over the past three years on intensive production planning and hard work, and every member involved should all be very proud of what they have achieved.”

Ship 03 block consolidation continued with blocks 717 and 713 in April, and will be followed by the mast lift expected in early May.