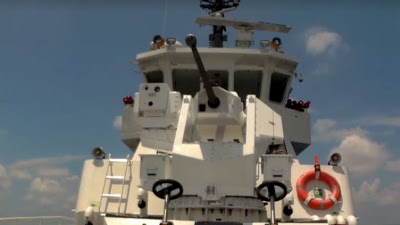 The tests, which were conducted about 15 n miles west of Pulau Mentagor, off the coast of Perak, were conducted to validate the weapon’s successful integration with systems on board the vessel.

These involved a single seaborne target that was set adrift from and subsequently fired upon by Bagan Datuk in single and burst modes of three rounds each. Present during the tests were engineers from Turkish defence company Aselsan, which is supplying the naval gun system to the coastguard. According to specifications provided by the company, the SMASH system is fitted with a 30 mm Mk 44 Bushmaster-II cannon that fires 200 rds/min.

Bagan Datuk is the first of six 44 m coastal patrol vessels ordered from Malaysian shipbuilder Destini Shipbuilding & Engineering under a MYR380 million (USD87 million) signed in 2015. The platform is derived from a design by Germany-based Fassmer Shipbuilding Company and will be the first vessels operated by the Malaysian Coast Guard to feature an organic unmanned aerial vehicle (UAV) capability.

Each NGPC can deploy the Thales Fulmar unmanned aerial vehicle (UAV) from a catapult-based launcher situated just behind the position of its primary weapon.