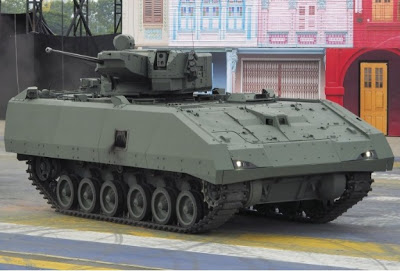 The next-generation armoured fighting vehicle will replace the Singapore Army’s ageing M113A2 Ultra armoured personnel carriers, which have been in service since the early 1970s. (photo : Jane’s)

The yet unnamed combat variant, currently designated the next -generation armoured fighting vehicle (NGAFV), has been under development by the country’s Defence Science and Technology Agency (DSTA) in partnership with Singapore Technologies (ST) Kinetics – the land systems arm of local defence prime ST Engineering – since 2006.

Singapore’s Ministry of Defence (MINDEF) announced on 22 March that it had awarded a contract to ST Engineering for the production of the NGAFV with deliveries expected to commence in 2019. However, the ministry did not disclose how many vehicles have been ordered.

According to specifications released by MINDEF, the NGAFV measures 6.9 m long, 3.28 m wide, and has an overall height of 3.2 m. It will be operated by a crew of three comprising a driver, gunner, and vehicle commander with accommodation for up to eight fully equipped dismounts.

The vehicle is powered by a 710 hp MTU 8V-199 TE20 diesel coupled to a Kinetics Drive Solution (KDS) HMX3000, which provides a power-to-weight ratio of 24.5 hp/tonne. This enables the vehicle to achieve a maximum stated speed of 70 km/h and operating range of 500 km.

The prototype shown is equipped with a remote weapon station (RWS) armed with an Orbital ATK Armament Systems 30 mm MK44 30 mm calibre main gun, a coaxial 7.62 mm machine gun, and eight 76 mm smoke grenade launchers. An independent commander’s sight enables the commander to survey the environment for threats independently of the gunner’s sight, and lay the gun on potential targets for the gunner to engage.