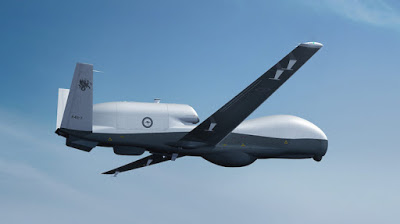 Defence has confirmed that it is considering the acquisition of “up to seven” Northrop Grumman MQ-4C Triton air vehicles, despite seeking expressions of interest for the delivery of facilities to support only “up to six” aircraft.

While the Integrated Investment Program stated that Defence would acquire precisely seven of the remotely piloted aircraft from the early 2020s, it is understood that a specific number is yet to be determined.

“Delivery of the Triton capability is constrained by the number of ground-based mission control systems, operated by remote pilots and sensor operators, rather than the number of Triton [air vehicles],” a Defence spokesperson told Australian Defence Business Review.

“Defence continues to analyse information received from the US Navy to determine the most efficient and effective mix between Triton and mission control systems to deliver the capability effect sought by the Australian government.”

Meanwhile, the spokesperson stated that Defence intends to acquire and sustain the Triton unmanned aircraft system (UAS) capability through a cooperative project arrangement with the US Navy.

Acquisition approval will be sought from Government in 2017-18, the spokesperson added. Indeed, the AIR 7000 Phase 1B Multi-mission Unmanned Aircraft System project is listed as being in development for second pass approval consideration in 2017-18 in the Defence Portfolio Budget Statements 2017-18.

Defence sought expressions of interest on May 23 for the delivery of facilities and infrastructure at RAAF Base Edinburgh and RAAF Base Tindal to support the Triton acquisition.

The location of the facilities is expected to be finalised as part of the AIR 7000 Phase 1B approval in the second quarter of 2017, according to a document obtained through AusTender that provides details of the sustainment facilities to be constructed.

Confusingly, the document states that the procurement will be conducted through the Foreign Military Sales (FMS) program, rather than a cooperative project arrangement.

The expression of interest process is due to close on June 20.