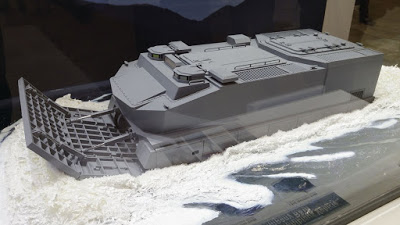 Mitsubishi has unveiled details of a tracked amphibious vehicle it is proposing to Japan’s army. Vehicle is intended to boost the service’s amphibious transport capabilities (photos : Jane’s, Army Recognition)

The details were revealed at the MAST Asia 2017 defence exhibition and conference, which is taking place in Tokyo from 12-14 June. According MHI officials who spoke to Jane’s at the exhibition, the Mitsubishi Amphibious Vehicle has been designed to achieve both good manoeuvrability on land, and relatively higher speeds in the water in comparison to other amphibious vehicles in the market today. 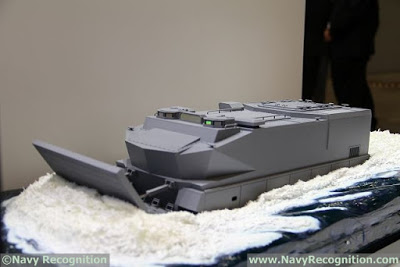 “MHI has extensive experience in the design and construction of large surface ships,” said Mitsuhiko Ikeya, a corporate communications officer representing the company at MAST Asia, in response to questions from Jane’s . “As such, MHI has incorporated these experiences in the design of the vehicle so that in can operate very well in the water,” he added.

Among features that can achieve this is the vehicle’s integrated arm hydro pneumatic suspension, which can retract the platform’s wheels and track during water operations to recue drag, said MHI. In the water, the vehicle is powered by compact high-thrust water jets. The vehicle has been incorporated with MHI’s 3,000 metric hp (2,206 kW) diesel engine but the vehicle’s top speeds on land and water are still being verified with the demonstrator unit, said the company. 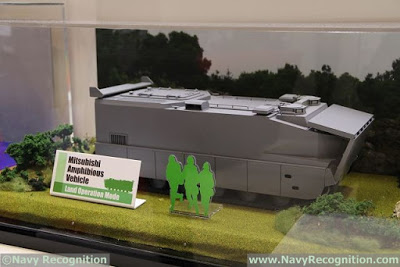 According to further specifications provided by an MHI representative on site, the vehicle can accommodate a crew of about 15, but this can be changed according to requirements of the JGSDF and its intended mission sets. Weapons that can be mounted on the vehicle have also not been finalised.

The Mitsubishi Amphibious Vehicle demonstrator unit is currently undergoing further verifications internally within the company, but a full show of the vehicle’s capabilities is expected to be made to the JGSDF soon, said MHI.