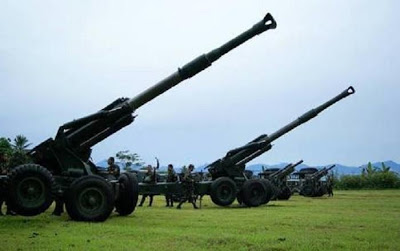 A dozen of Israeli Elbit-Soltam M-71 155mm/39CAL Towed howitzers are now with the Philippine Army and Philippine Marines, each service having 6, according to MaxDefense Philippines who has sources from the military and defense community.

“Based on information we received, the Philippine Army and Philippine Marine Corps are now in possession of all their ordered M-71 155mm/39 towed howtizers delivered by Soltam through Elbit C4 and Land Systems, as part of the AFP Modernization Program under the old RA 7898 of 1995, not under any of the newer Horizon phase,” MaxDefense Philippines said today in its social networking page.

The Department of National Defense (DND)-Armed Forces of the Philippines (AFP) initiated the project to acquire twelve 155mm Towed Howitzer with 240 rounds of high explosive ammunition including an integrated logistics support package early 2015 with approved budget of PhP438.6 million.

Elbit won the bidding by submitting a bid of PHP410.84 million.

DND public affairs office chief Arsenio Andolong revealed early last month that three of the 12 Israeli towed howitzers have arrived in April and the other nine were in transit.