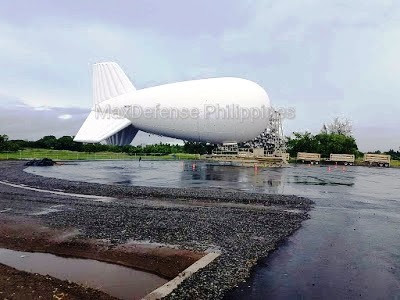 The Tethered Aerostat Radar System (TARS), low-level airborne ground surveillance system that uses aerostat as radar platform, of Philippine Navy from United States government has finally arrived, MaxDefense Philippines said without giving details where the said platform is stationed and when it arrived.

The aerostats are large fabric envelopes filled with helium, and can rise up to an altitude of 15,000 feet (4,600 m) while tethered by a single cable. The largest lifts a 1000 kg payload to an operating altitude providing low-level, downward-looking radar coverage.

TARS has a Maximum Detection Range of 200 nautical miles.

This is among the military aid provided by US to boost the Philippines’ maritime surveillance capabilities amid West Philippine Sea dispute.

The TARS for Philippine Navy was first announced by US officials in April 2016.

In 2015, the US government announced its five-year Maritime Security Initiative, a commitment to help partner nations like Philippines address common challenges with an overall budget of US$425-million.

“We’ve just released the first tranche of this money, nearly 80 percent of which is going to the Philippines. There it will help modernize the technology and train staff at the Philippines National Coast Watch Center, enhance an information network to enable the sharing of classified communications between U.S. Pacific Command in Hawaii and key Philippines maritime command centers, provide an aerostat reconnaissance platform (airship), and outfit Philippine navy patrol vessels with better sensors so they can see and do more in the region’s waters,” former United States Secretary of Defense Ash Carter said in April 8, 2016.