ROCKHAMPTON, Australia — The U.S. Navy has put its up-gunned expeditionary strike group concept into practice within a realistic war-fighting scenario, with allied surface combatants joining an amphibious ready group, or ARG, and its embarked Marines for a major exercise off the coast of Australia.

The Bonhomme Richard ARG was joined by a surface action group, or SAG, made up of the U.S. destroyer Sterett and four Australian frigates at Exercise Talisman Saber 2017, which saw American and Australian forces carry out two major amphibious landings at Australia’s Shoalwater Bay Training Area. 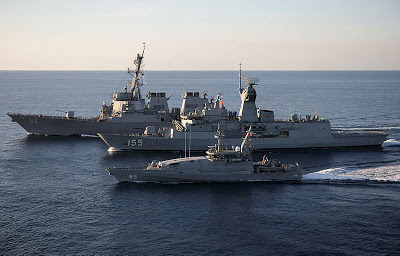 According to Royal Australian Navy Capt. Guy Holthouse, sea combat commander for the Talisman Saber 2017 Combined Amphibious Force, the up-gunned ESG was pitted against a very active and capable adversary that presented a mix of surface, air and subsurface threats using real submarines, aircraft and ships throughout the exercise, which added training value to both U.S. and Australian forces.

Rear Adm. Marc Dalton, commander of the U.S. Navy’s Amphibious Force 7th Fleet, added that Talisman Saber was used “to work on concept development (of the up-gunned ESG), especially for the cruiser/destroyer/frigate integration into the force as we build towards adding the F-35B.”

Dalton noted that the amphibious assault ship Wasp, which will replace the Bonhomme Richard as the Navy’s forward-deployed big-deck amphibious ship in Japan this fall, will start deploying the F-35B at sea in the region in early 2018 and will represent “the first opportunity to operate with the complete package of the up-gunned ESG.” 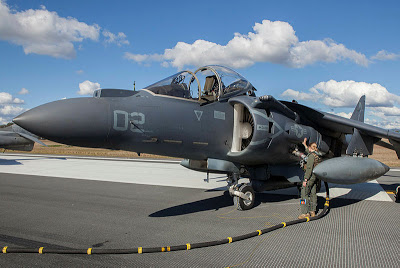 In addition, a Sikorsky MH-60R Seahawk anti-submarine helicopter from the aircraft carrier Ronald Reagan was also embarked onboard the Bonhomme Richard for a short duration during the exercise, which Amphibious Force 7th Fleet said was for “practicing the up-gunned ESG concept in providing surface/subsurface defense of the ESG.”

Dalton told Defense News that embarking the MH-60R onboard the Bonhomme Richard is one of several options being evaluated to “dynamically reconfigure the capabilities” of the amphibious forces, which he described as being very flexible; “what we’re looking for is what the right situation would be to when we want to bring that capability onto the amphibious ships and what the trade-offs are.”