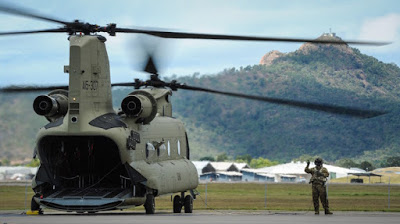 Boeing Defence Australia has been awarded a five-year contract valued at up to $20 million to provide maintenance to the Army’s new fleet of CH-47F Chinook helicopters at Townsville.

The Army’s 5 Aviation Regiment operates 10 Boeing CH-47F ‘Foxtrot’ Chinooks from RAAF Base Townsville, with the heavy-lift helicopters delivered in 2015 and 2016 to replace older CH-47D model Chinooks. Boeing Defence Australia had provided CH-47D maintenance at Townsville since 2010.

Adelaide embarked the helicopters in early August in order to assess all aspects of ship, aircraft and equipment interfaces to enable the development of recommendations for embarked operating envelopes, Navy Daily reported earlier this month.

Over seven weeks in August and September, the ship sailed from Tasmania to Darwin to conduct the cold and hot weather aspects of the trial. During that time, the Chinooks flew a total of 119 hours and conducted 625 deck landings.