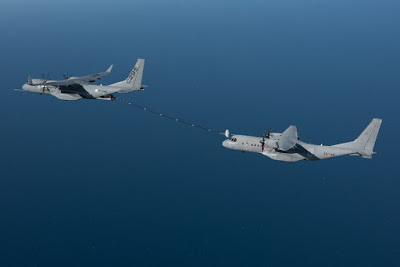 Airbus DS demonstrated the aerial refuelling capability of the C295 in late September, and plans to conduct helicopter-receiver trials of the system before the end of the year. (photo : Airbus DS)

A company-owned C295W (winglets) equipped with a palletised AAR kit performed a series of contacts with a Spanish Air Force C295 receiver aircraft on 29 September. Tests took place at various speeds down to 110 kt.

The C295 AAR platform has a particular application in the aerial refuelling of helicopters and Airbus DS has announced helicopter-receiver trials before the end of the year (helicopter proximity flights have already been successfully flown).

Development of an AAR kit for the C295 was first revealed by Airbus DS at its annual Trade Media Briefing in June. As noted at the time, the modification uses a standard AAR kit fitted to pallets and involves only minimal modifications to the aircraft related to the control systems for hose-and-drogue operations.

While the AAR refuelling kit does not currently include auxiliary tanks fitted in the aircraft (fuel for offloading being drawn from the main tanks), these could be added at the customer’s request.

Although developed mainly for in-flight refuelling of helicopters, the C295 tanker could be used for replenishing other turboprops and the company has future plans to use the concept for aerial refuelling of unmanned aerial vehicles. The concept would also enable the C295 to serve as a forward refuelling platform for ground vehicles.