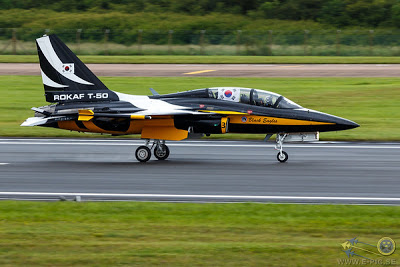 KAI had a large stand at this year’s show at the Langkawi Internationa Maritime & Aerospace Exhibition. Its appearancec was also in support of the South Korean air force’s Black Eagles display team, which performed daily in the show’s flying display.

The Black Eagles display with eight T-50B aircraft. It started using the type in 2009, having previously used the Cessna A-37 Dragonfly.

There is a no formal requirement for new trainer aircraft in Malaysia, so KAI sees its presence at the show as mainly introductory in nature.

The type fills two roles, both as an advanced jet trainer and a light attack aircraft. It is understood that all T-50 aircraft subsequently produced will be the FA-50 variant, which has a light attack capability with precision weapons, and a cannon.

KAI has enjoyed strong success with the type in Southeast Asia, selling the aircraft to the Philippines, Thailand, and Indonesia.

Kuala Lumpur has insufficient assets for training pilots, with just seven MB-339CM trainers – the eight aircraft crashed in May 2016, with both the pilot and co-pilot ejecting safely.

A decision on new trainers is likely to be years away. It is unlikely made until Kuala Lumpur selects a new fighter under the auspices of the Multi-role Combat Aircraft (MRCA) deal. The MRCA decision has been delayed for years, with no clarity on timelines.

The T-50 also forms the basis Lockheed Martin’s bid in the US T-X competition to replace the Northrop T-38.