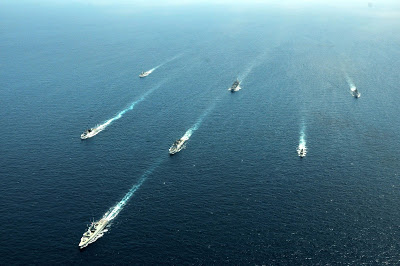 The Republic of Singapore Navy (RSN) and the Indian Navy (IN) conducted the Singapore-Indian Maritime Bilateral Exercise (SIMBEX) from 18 to 24 May 2017. Hosted by Singapore, the exercise comprised a shore phase held at RSS Singapura – Changi Naval Base and a sea phase in the South China Sea. This year’s exercise is the 24th iteration of the annual bilateral exercise held since 1994.

The RSN deployed two frigates (RSS Formidable, equipped with an S-70B naval helicopter, and RSS Supreme) and a missile corvette (RSS Victory), while the IN participated with two frigates (INS Sahyadri and INS Shivalik), a corvette (INS Kamorta), an oiler (INS Jyoti) and a P8-I maritime patrol aircraft. 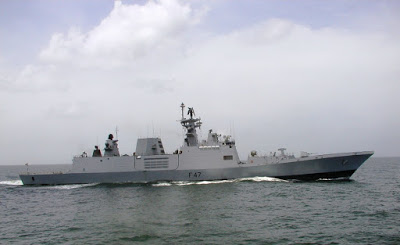 During the exercise, the two navies conducted a series of advanced naval warfare serials, including air defence exercises and gunnery live-firings. The sea phase culminated in a mission-oriented surface action group exercise wherein assets and personnel from the two navies worked together to plan and execute a series of warfare missions.

Over the years, SIMBEX has grown in scope and complexity, expanding beyond its traditional emphasis on anti-submarine warfare to incorporate elements of maritime security, anti-air and anti-surface warfare. CO RSS Formidable, Lieutenant-Colonel (LTC) Albert Khoo said, “SIMBEX has progressed both in scale and complexity over the years – from a serial-based exercise to today’s mission-based exercise incorporating scenarios with threats from surface, underwater and air.”

Apart from SIMBEX, the two navies also interact regularly through professional exchange programmes, staff talks and training courses. Testament to the warm and long-standing defence ties between both countries, INS Sahyadri and INS Kamorta joined in the RSN’s Golden Jubilee celebrations, participating in both the inaugural Singapore International Maritime Review at RSS Singapura – Changi Naval Base on 15 May 2017, and the International Maritime Defence Exhibition and Conference (IMDEX) Asia from 16 to 18 May 2017. Both navies are also exploring new and enhanced areas of cooperation in the maritime domain.