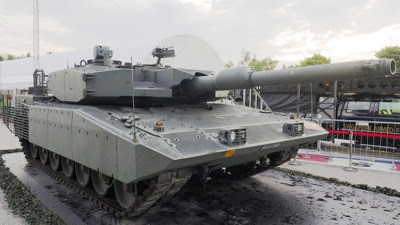 An unspecified number of the Singapore Army’s Leopard 2SG MBTs have received a new sighting system for the vehicle commander. At least two upgraded examples were shown at the Army Open House 2017 exhibition in May. (photo : Jane’s)

The Singapore Armed Forces (SAF) is continuing to improve the combat effectiveness of its fleet of ex-Bundeswehr Leopard 2A4 main battle tanks (MBTs) with new capabilities, with the most recent addition revealed to be a commander’s panoramic sighting system.

At least two upgraded Leopard 2A4 MBTs – which are operated by the Singapore Army under the designation of Leopard 2SG – featuring the new system, called the Commander’s Open Architecture Panoramic Sight (COAPS) were exhibited in public at the Army Open House 2017 (AOH 2017) event from 27-29 May.

Singapore Army personnel with whom Jane’s spoke to at AOH 2017 said the new sighting system is supplied by STELOP. The company is a subsidiary of Singapore Technologies (ST) Electronics, which is the advanced electronics and communication development arm of local defence prime ST Engineering. However, industry sources told Jane’s that STELOP is manufacturing COAPS under license from Israel’s Elbit Systems Electro-optics (ELOP), which has been offering the system on the international market since it was launched in March 2010.

According to Elbit’s specifications, COAPS is a modular dual-axis stabilised sight aimed specifically at armoured fighting vehicle (AFV) and MBT applications. Based on an open architecture design, it can be configured with different sensors, including 3-5 µm or 8-12 µm thermal imagers, day and night charge-coupled device (CCD) cameras, and eye-safe laser rangefinders, to suit mission requirements.