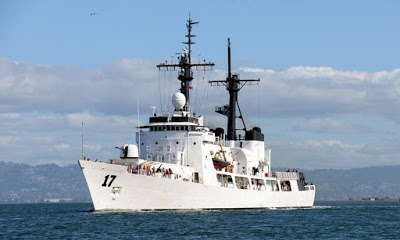 MANILA — The country’s third Hamilton-class cutter, the BRP Andres Bonifacio (FF-17), is scheduled to arrive to the country on Dec. 8 at the Manila South Harbor.

This was confirmed by Philippine Navy flag-officer-in-command Vice Admiral Roland Joseph Mercado in an interview with the PNA during the sidelights of the Department of National Defense’s 77th founding anniversary Tuesday.

“She’s a beautiful ship, so be there when she arrives,” Mercado said.

BRP Andres Bonifacio is expected to boost the Navy’s capability to conduct “territorial patrols” within the nation’s exclusive economic zone.

“FF-17 is a significant addition to the Navy’ inventory of ships in order to boost the conduct of territorial patrol missions within our EEZ,” PN spokesperson Capt. Lued Lincuna said.

The frigate departed the US Coast Base in Alameda, California Nov. 1 (American time) and made reprovisioning stops in San Diego, California; Hawaii and finally Guam before proceeding to the Philippines.

The BRP Andres Bonifacio is formerly the USCGC Boutwell which was retired from US Coast Guard service last March 16 and handed to the Philippine Navy last July 21.